I decided I should get out of the house and enjoy the sunshine yesterday, instead of moping inside my daylight free apartment. So I drove over to a part of Burbank I had never encountered before, in search of my fancy schmancy Bumble and Bumble Treatment shampoo and conditioner, that I am totally obsessed with. I forgot how nice people in Salons are, I made a new BFF when the guy helping me found out I am from Portland, even though he touched my fried hair with a little bit of pity and disgust, I forgave him because he is from the PNW. It turns out the salon was on West Magnolia Street that has all the vintage stores that people rave about, but wont tell you where the are. I refrained from buying anything, but was thoroughly pleased with the 3 I went into, and I'm pretty sure there are about 5 more, along with a leather outlet that claimed to have fancy brands. I will definitely be making a trip back there when I have cash flow, stamina, and a partner in crime.

I then made a trip to Target for some necessities, and proceeded to try on the one of the Thakoon bikinis, and decided I was just not ready to go there.

Alexa then came over and we went to Alegria on Sunset for some delish Mexican food. It is by far my favorite Mexican restaurant in LA, partially because it is guilt free and non-greasy, but mostly because it is absolutely amaaaazing. I had the fish tacos, and she had the veggie burrito. Yum. It would be more my fave if they served booze, it is BYOB though, which sort of makes up for it. But you cant really BYO margaritas. Lame.

My 2 outfits for the day. 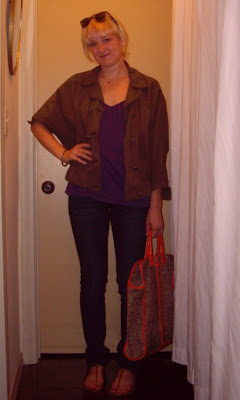 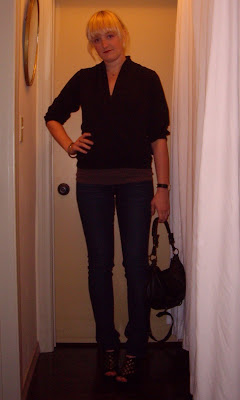