monday night at the silverlake lounge

Last night, after I'd stuffed my face with all of the left over pizzas from my party, J. Marie called me and invited me to join her, Jasmine and Daven at the Silverlake Lounge to see some local bands. I said of course, because I no longer say no to social interaction and I've never been to the Silverlake Lounge, even though I've driven past it about a million times. Apparently they think music is salvation? 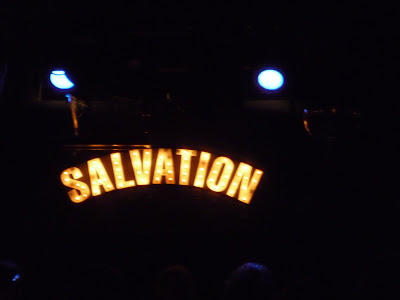 The first band we saw was Union Line, a band of 5 cute guys with lots of hair who all sang and banged on drums and played the harmonica. It was super entertaining. Apparently, the reason we went to the show was to see the Love Grenades, because their manager wants Oh Darling to play with them. Well, the Love Grenades were absolutely awful. The lead singer was clearly wasted and kept swearing and messing up, yelling "louder" to her keyboard guy, and stopping half way through songs to start over. The drummer sounded like he'd never played before, and the poor guy on guitar was so embarrassed he looked like he wanted to cry. The crowd cheered when she said it was their last song, and that is when we left. I can't complain though, because it was free. 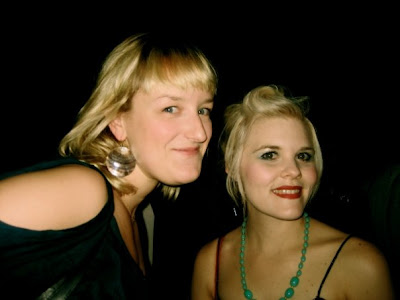 We ended up at my favorite, The Gold Room, so the Darlings could experience the glory of the neon and glass panelled bar, free tacos and peanuts and old men named Pepe who "know about music." Awesome. Jasmine and J. Marie are sooooper fun, and they like to dress up in fabulous outfits like I do, which only makes things more fun! 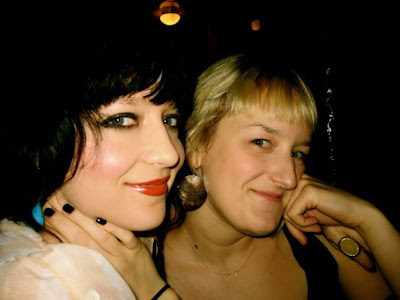 (Photos of us girls courtesy of Jasmine)

Oh and did I mention that my b-day present from Juan is my ticket to Coachella!!! Dehydration here I come!!
Posted by Fanny at 10:05 AM