I was slightly panicked when I realized that I might have missed my chance to purchase the December/January issue of Paris Vogue, which always features a special edition calender full of all the newest models for the new year. 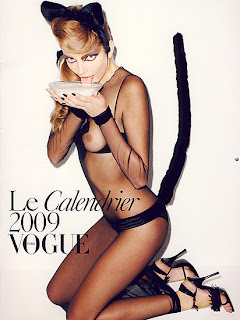 While I was still in Portland, I went to all 3 Rich's, and it was nowhere to be found. I went to a few different bookstores down here, with no more luck. Damn that Paris Vogue team that EVERYONE is obsessed with these days. As a last resort I went to one of the sidewalk newsstands, and of course, that is where I found it, right as the February issue is everywhere. PHEW! I was counting on that calender!

This year the photos were taken by Terry Richardson - normally not my favorite for his crotch shots of skinny, naked, American Apparel-esque girls smoking cigs - but this shot was fun. All pin-ups, garter belts, set hair and liquid eyeliner. 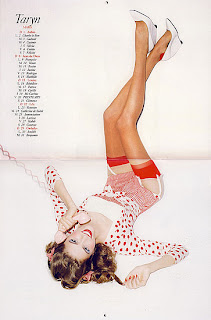 As much as I am a super fan of Paris Vogue, the main issue was nothing to write home about, I was actually way more impressed with the February American Vogue (I know, right?). It was all dedicated to Princess Stephanie of Monaco. As I was not a conscious human being in the 80's and early 90's, she really doesn't mean much to me beyond being a Princess and the daughter of Grace Kelly. I will have to read one of the articles, and maybe I will care more...
Posted by Fanny at 5:12 PM