champagne at the darling mansion

Last night I went over to The Darling's house for some wine and overall redonculousness. For some reason things are always a little crazy there when we light the fire and keep opening new bottles of wine. It doesn't help that we all showed up with 2 or 3 bottles each and when the other peeps that came over brought bottles of booze too.

Oh well, it was a night filled with drinking, dancing, music making and lots and lots of giggling. And even though I felt gross I managed to produce an outfit that was free of pants.

No Pants After Dark #9 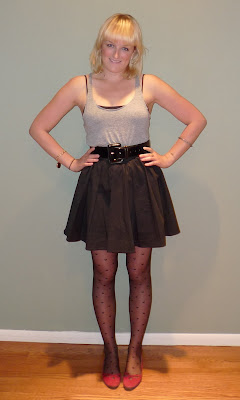 Unfortunately the tights did not make it through the night. I had a feeling when I put them on that they would be a one wear item, but I was really hoping to get 2. Alas, near the end of the night they basically disintegrated. LAME. I wish I had bought them in bulk, but they were not cheap.
Posted by Fanny at 5:45 PM